So, we’ve all seen it now, right? If you haven’t seen it, turn around and go elsewhere because here be spoilers.

I’m going to save my many opinions about the ending until, well, the end.

We start with somebody trapped in a box, obviously not doing well, with muffled creepy whistling outside. My first thought was that this was from Daryl’s perspective, since he would have obviously been the worst off after the end of last week’s episode.

Then we have Morgan trying to find Carol, but instead he finds a sign that says “You Are Alive” and a very healthy horse all saddled up and ready to go. The paranoid Walking Dead fan in me was screaming at him to step away. IT’S A TRAP, MORGAN! 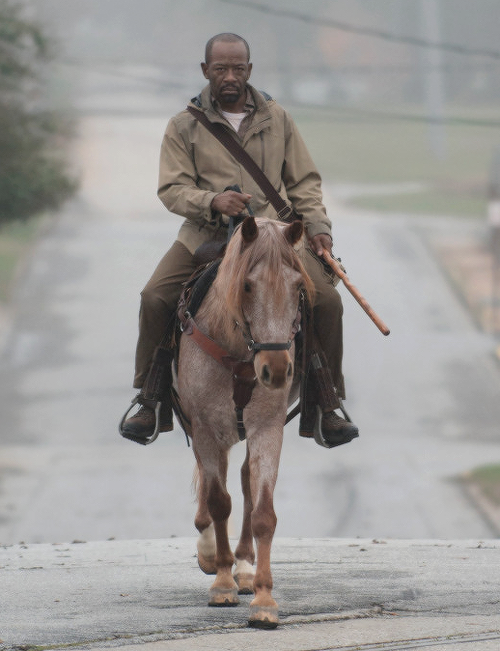 Then we see creepy guy that Carol unfortunately left alive back on the road. Damn. He’s bleeding all over her rosary.

Then we have some poor bastard running through the woods surrounded by creepy whistlers. Can’t stand the creepy whistling. WTF IS that?

Rick is getting Maggie settled into the RV  to go to the doc at Hilltop and apparently the whole gang is joining him. Eugene is, as always, awesome. “I will be your anchorman. Yes, I damn will.”

Now Poor Bastard is surrounded by Saviors in the woods and they’re getting all talky before beating the crap out of him.

Back to Carl and Enid and oh, Carl, do not do what I think you’re…

Yep, he locked her in a damn closet. That’s gonna go over well.

And he fucking LEAVES her in the closet, telling her to JSS (just survive somehow). Nice, Carl. I hope you’re not planning on losing your virginity any time soon.

Dude, when did Gabriel get all badass, organizing the defense of the town? Good for him. Also, that’s a pretty rad sweater/jacket thing he’s rocking.

Morgan finds Carol curled up in a ball, basically waiting to die.

Poor Bastard is dragged out into a road where a roadblock is set up. He’s told that he’s going to be made an example and asks “for who?”. Yeah, I think we all know the answer to that one.

Rick is trying to reassure Mags that they’re going to get to Hilltop and she’s going to be fine. He gives her the patented Rick Grimes “we’re still here and we can do anything together” talk, which means that they are SO FUCKED.

Back to Carol and Morgan, who are holed up in the library that Poor Bastard apparently came from. She’s cracking jokes about being too busy bleeding to kill a hard-to-reach walker. Bless.

And here we go. Saviors in the road.

I cannot tell you how much I love Abraham’s turns of phrase during this episode.

They compare dicks with the Saviors for a few minutes. Rick asks if head Savior dude wants to make today his last day on earth. Savior dude turns it around on Rick and RICK, JUST GO HOME.

Look at him. All cocky. Watch that, Rick.

Back to the box. This time, it sounds like there are muffled voices talking about weapons outside of it.

Eugene figures out a new route for them because he is apparently the only one who can use a map.

Carol REALLY does not want to go back to Alexandria.

Abraham Ford, is this really the time to be asking Sasha if she wants to be your baby mama? It’s very sweet and all, but…

Ah, here we have Saviors Group B blocking THIS road. Rick and Co smartly decide to just reverse out of there while one of the Saviors shoots his gun menacingly into the sky. Isn’t wasting ammunition like that some sort of post-apocalyptic felony?

How many people do the Saviors have if they can afford to have them spread out all over the countryside waiting for Rick’s people?

Morgan kills and cuts down Carol’s inconveniently placed walker, who is obviously the guy that the Saviors talked about stringing up earlier.

Morgan goes back inside and guess who ISN’T there? Morgan, I think she really meant it when she said she wanted you to leave her alone.

The next road block is Walker Red Rover and one of them has a couple of Michonne’s dreds tucked under its scalp (GROSS). Another one has Daryl’s jacket and a few bolts through the heart. All hell breaks loose when the Saviors start shooting at them, but they open up the walker block and get through. Exactly the way the Saviors wanted. Which is proven when they come up on the NEXT road block, which looks very Mad Max-y, with tons of Saviors standing on top of cars, looking all dramatic and tough. Rick and Co. reverse the fuck out of there.

Morgan keeps looking for Carol, spotting her rosary next to a dead walker. Carol is on her own and gets the gross walker kill of the night. Peeling scalp is always nasty.

And here comes the asshole from the road, promising to kill her slow. Ugh. Poor Carol.

Rick is in the RV with Maggie, trying to reassure her while looking like he’s about to pee his pants. She tells him she believes in him. Bless her. He looks like he wants to just go curl up in a corner and cry.

Carol is with the psycho asshole and he gets pissed when she seems like she’s relieved to die.

So he shoots her again. When he starts walking away she basically taunts him into coming back to finish her off. Then we find out who Morgan will kill for.

And it’s Carol. Do they have to get married now?

Wait a minute, who the hell are these guys?

Is that a Hilltop spear? They don’t look like Saviors with their football gear. Are these guys from another community? They seem decent enough. I’ve seen fans of the comic online saying they’re from the Kingdom. Here’s hoping they’re not crazy!

The next roadblock is a giant pile of trees. The Saviors toss Poor Bastard over the side and hang him for everyone to watch. God, they’re dicks. Then they light up the trees and remind Rick to treat his friends like it could be his last day on earth. Or one of theirs. Then tell him to go get where he’s going. I don’t like the sound of that.

Eugene comes up with the idea of him taking the RV as a decoy and letting the rest of them make Hilltop on foot with Maggie. He gives Rick the recipe for bullets. He has lovely little moments with Rick and Abe. I just love Eugene. I’m so glad he’s coming into his own and trying to not be a chickenshit anymore.

Eugene takes off, and the rest of them start heading through the woods. Carl and Rick start having a heart to heart about protecting their people and, oh shit, creepy whistling in the woods around them. Damn it.

They run out into a clearing and headlights come on to blind them. There is their RV. All of the Saviors are surrounding them and doing the creepy whistling. OMG SHUT UP! They’re surrounded. Eugene is on his knees, beaten.

“Welcome to where you’re going.” They take their weapons. Dude, they took the Python. That’s not going to go over well. And that dude just flicked Carl’s hat.

There will come a time in the future when Carl will kill that guy slow. You know it.

They are all ordered to their knees, INCLUDING MAGGIE. Dicks. Rick eventually does it, looking like he has no idea how the fuck they got to this place. I can’t blame him. After all this time of being the baddest ass in town, he may have just been shoved off his throne.

They drag Daryl, Michonne, Rosita, and Glenn out of the back of a van. Daryl has seen better days, that’s for sure.

Wow, and here comes Negan. And he’s kind of a charming psycho.

The new world order: Give me your shit, or I will kill you. Pretty simple.

Rick seriously looks like he’s about to have a nervous breakdown.

Negan has a highly entertaining interaction with Carl, who is looking like he wants to rip Negan’s nose off with his teeth.

Then he tells Maggie she looks so shitty, he should put her out of her misery, which makes Glenn freak out. Negan is not pleased.

Negan does not enjoy your stupid emotions.

Negan realizes that Carl is Rick’s kid and when Rick tells him to just stop it, Negan has the best (and most accurate) comeback ever.

Heh. The little future serial killer. Carl is a little unnerving these days.

Negan does eeny meeny miney mo to pick who to beat the hell out of.

AND FUCKING CLIFFHANGER. WE HAVE NO IDEA WHO IT WAS. GODDAMNIT.

So here’s the thing. This episode was amazing. Everybody acted their asses off. We might have gotten introduced to another community. Morgan broke his rule and killed to protect Carol. Rick was forced to his knees before Negan and failed to get them out of it. Eugene tried to be a hero and let the others get away. Everyone was fantastic. Sadly, all of that is overshadowed by the cliffhanger. Which is, I suppose, how it was planned, but it’s kind of a shame.

I watched the Talking Dead and Gimple said they tried to keep the end fairly impressionistic in order to avoid giving away the identity of the person who was killed by Negan, because they knew everyone would be Zaprudering the hell out of it.

So true. I am going to assume that it is the same person who got it in the comics. I haven’t actually read the comics, but you can’t be a big fan of the show without hearing bits and pieces of what happens. I know who Negan kills in the comics and I know it has huge knock-on effects. I also know they haven’t been sticking to the comics religiously. I can’t think of another character, though, whose loss would have the same impact on the rest of the group. I’m trying to be vague in order to avoid spoiling those of you who don’t know.

Gimple also said they didn’t reveal who got killed because that moment is when this story ends and the reveal and its after-effects are part of the next story. It makes sense, but I also kind of want to hit him. Someone on Reddit hit it on the head.

Also, what the fuck was Norman Reedus wearing on The Talking Dead? That jacket was bloody awful. Fire your stylist, Reedus. I volunteer to take over.

Yeuch. He’s usually pretty impeccably tailored. This is way too ’90s for him. If you wore it the last time, you’re too old to wear it this time.

Anyway, I think we all need something nice now.

Awwww, remember that? Remember when we got to have nice things?