So, we’ve all seen it now, right? If you haven’t seen it, turn around and go elsewhere because here be spoilers.

END_OF_DOCUMENT_TOKEN_TO_BE_REPLACED

We start with Abe and Sasha. They’re patrolling together, then Sasha tells him that she’s not going to be patrolling with him anymore. And things get weird. What is UP with them???

END_OF_DOCUMENT_TOKEN_TO_BE_REPLACED

Last we saw our brave little troopers, Carl was lying in bed with one less eye, everyone was covered in blood and Daryl had just set a pond on fire.

END_OF_DOCUMENT_TOKEN_TO_BE_REPLACED

If you haven’t seen last night’s The Walking Dead, stop here. If you have, continue on for the thing that HAD TO BE DONE.

END_OF_DOCUMENT_TOKEN_TO_BE_REPLACED

Well. We’re back, huh? That was EXHAUSTING. Awesome, but exhausting.

We open up where we closed before the mid-season break that WOULD NOT END. It’s kind of adorable that the head dude sent just one of his little minions to the back of the truck with Daryl. Slap a red shirt on that biker. He’s dead. Pour one out disdainfully, Kate.

Abe: “WHO’S NEGAN?” Bless him. That’s going to be his shtick now, right?

That’s my BOY! Who needs a crossbow when you have a MOTHERFUCKING ROCKET LAUNCHER? Hell yes.

Back in Alexandria, Sam isn’t dead yet??? They’re still making their way through. Gabriel offers to take Judith to the church to keep her safe. OH YOU BETTER DO THAT, GABRIEL. So much as a hair on that baby’s head is out of place and Rick will gut you without blinking an eye. Sam refuses to go with Gabriel and Jessie gives in. I am judging her parenting decisions.

Carol, Tara, Rosita, Eugene and Morgan are all still locked up together in the Wolf Jail. The Wolf has taken Denise and is scoping out a way to get out. Denise is being so brave and still snarking at him and I kind of love her.

Enid and Glenn are inside the walls and locked into a church. Glenn makes Enid search the bibles and hymn books for hidden weapons. Enid calls it the Bible Glock, which I love. Glenn makes Enid feel like pond scum by bringing up Dale and Herschel and all the other awesome people he has lost. Because he is the sweetest cupcake ever.

Question: Exactly how long does it take to get the fuck out of Alexandria???

Well, shit, there goes Sam. Poor kid. I expected it to happen at the open of the show, frankly.

Well, shit. And there goes Jessie. Damn it. I liked her, even if she did make questionable parenting choices and had very little chemistry with Rick.

Oh, that’s just ugly. Poor Jesse. Nobody likes to get their hand chopped off while they’re being eaten alive.

RICK GRIMES, I TOLD YOU NOT TO TEACH THAT BOY HOW TO USE A FUCKING GUN. Did I not tell you he was trouble?

Well, Michonne is obviously having none of that. Did that gun just go off?

Pour one out for the Anderson Family. And Carl’s eye.

Cut to Carol telling Morgan “I should’ve killed you” and Morgan telling her “You can’t”.

Then cut to Wolf Boy getting bitten, then trying to get Denise to the Infirmary so that she can cut his arm off.

Rick gets Carl to Denise in the Infirmary and she gets to work trying to save his life, while Rick immediately LEAVES HIS POSSIBLY DYING SON TO GO HACK AT WALKERS.

Jessie is not the only one making fucking questionable parenting decisions around Alexandria tonight.

I did love this moment with Michonne and Carl before she does to back up that damn fool, Rick.

Glenn and Enid go to save Maggie, who is about to be shaken out of her tree.

The writers at The Walking Dead are having a lot of fun scaring the hell out of us by placing Glenn in potentially mortal danger, aren’t they?

YES! The fucking Cavalry have arrived!

Daryl Dixon got to have more fun than anybody else that day. It almost makes up for losing the crossbow and the bike.

Then the walkers start walking toward the Pond of Fire and the Alexandria locals (the ones still living) come out to join Rick and his posse to fight off the walkers. It was nice to see them nutting up and getting down to work.

So the battle ends. The Alexandrians win. Everyone is in the Infirmary getting patched up.

WAIT A MINUTE. Did Daryl have his shirt off?

Rick has a sweet moment where he tells Carl all about his renewed hope and how he wants to SHOW Carl this brand new world and he wants Carl to SEE how great it could be and CHOOSE YOUR WORDS MORE CAREFULLY, GRIMES. Jeez.

And because the Internet is a great place… 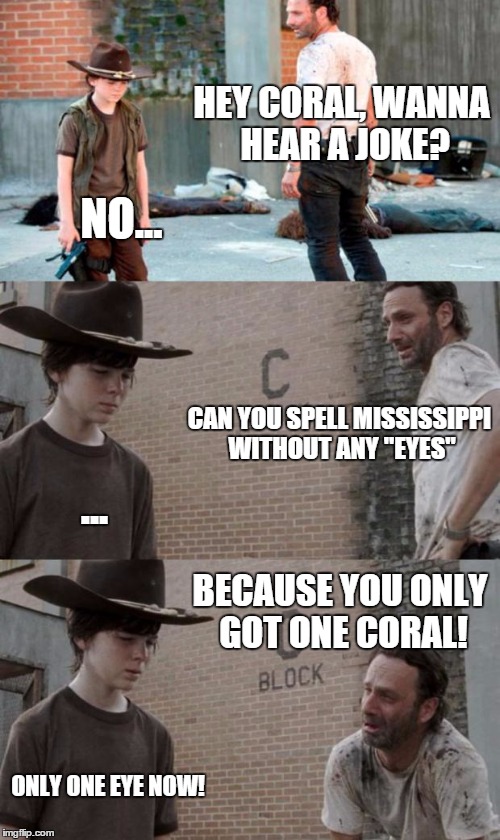 So Carl gets to work the sexy eye patch thing now. Is he finally going to cut his bangs so they don’t dangle in his one good eye? Might be a little trickier now that the hairdresser is dead, but… 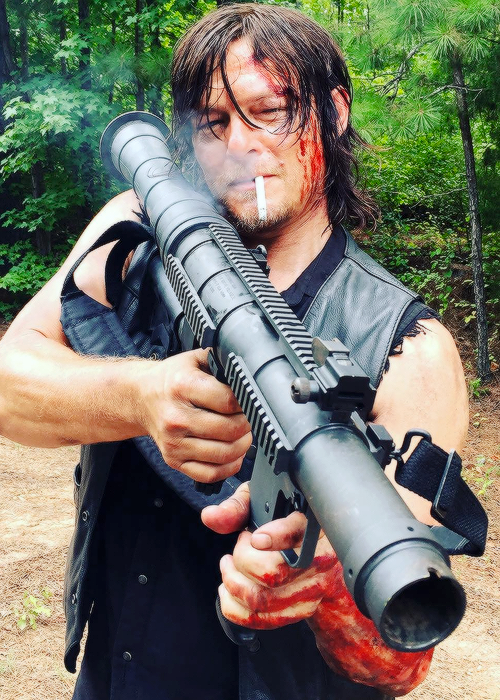 OK, so here we are. Half-way through the season. I think the past six episodes have covered, what, two days in TWD time? Two very, very, very busy days. Will the rest of the season continue like this? Is The Walking Dead going to turn into a ZA version of 24? If so, Rick is going to have to say “DAMN IT” a lot more.

END_OF_DOCUMENT_TOKEN_TO_BE_REPLACED

In order to be respectful of those friends of mine who watch The Walking Dead on Netflix on a year delay and somehow want to avoid spoilers, I’m putting everything behind a cut. Because I need to get this out.

END_OF_DOCUMENT_TOKEN_TO_BE_REPLACED

Dear Writers of The Walking Dead,

OMG ARE YOU SERIOUS?

Sigh. Bastards. This is going to stretch on through the mid-season finale, I’ll bet. Settle in, people. 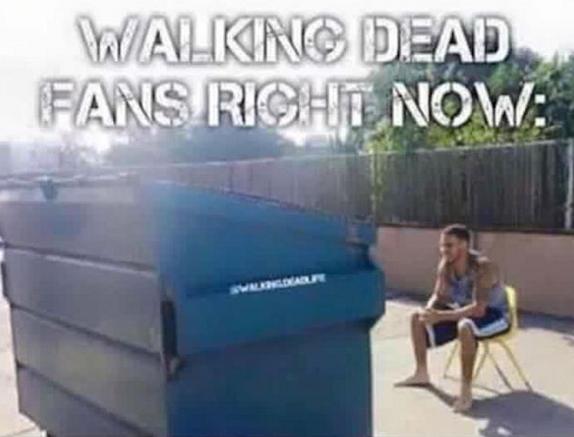 On with the show…. END_OF_DOCUMENT_TOKEN_TO_BE_REPLACED