Last we saw our brave little troopers, Carl was lying in bed with one less eye, everyone was covered in blood and Daryl had just set a pond on fire.

Now, we join the Grimes/whatever-Michonne’s-last-name-is household in a domestic moment. Rick is putting an extra hole in his belt, so we know he’s been putting some meat back on his bones. He puts his watch on, but NOT his wedding ring. Interesting. Judith is gurgling at him adorably from the floor. Michonne is trying to steal his toothpaste. Carl is throwing a ball at the wall for physical therapy. It’s all very sweet. We’ve skipped forward at least a couple of months, obviously. Everyone is feeling normal and looking healthy, which is nice. Please don’t let anyone get killed this episode. Please?

The conversation with Daryl and Denise about the pop is so completely adorable and awkward. She’s babbling and he’s trying so hard to be nice and not to tell her to please stop talking.

Eugene cracks me up. “Hunky Dunky”. I’m stealing that.

Once again, Daryl looks like he’s trying so hard to not tell him to please stop talking.

So Rick and Daryl have traded places when it comes to wanting to find other people for the community. Rick is all rainbows and unicorns and Daryl is all “motherfuckers took my bike and my crossbow”.

THE LOOK Daryl is giving him. You know he’s going to be pillaging some houses looking for some fucking Motorhead CDs so he doesn’t have to listen to Rick’s bullshit rockabilly music anymore.

WTF is Spencer doing going out into the woods by himself? Has he not proven that he needs back up?

I like how Maggie talks to Enid. She’s going to be an awesome mom.

We can’t be that far into the future, though. Maggie’s not showing at all.

Gee, guys, there’s a barn with the word “SORGHUM” on the side. I THINK THIS IS THE PLACE.

Daryl is, however, the sweetest cupcake in the world under all that grumbling. He makes Rick pull into the gas station to look for Denise’s gift for Tara. Makes me want to just pinch his cheeks. Or something.

Seriously, that is the heaviest vending machine ever if those two can’t turn it over.

Rick: “Soda and Candy why the trouble?”
Daryl: “Ain’t any trouble”

WHAT? Now who the fuck is this guy? And why is he wearing a bandit-style bandana?

Daryl seems to have been correct in his distrust of the messiah. “He swiped your keys, didn’t he?” Well, shit.

At least he chucked Daryl’s backpack out the window for them.

Michonne follows Spencer out into the woods to find out why he’s wandering out there with a gun and a shovel. He tells her he’s been doing it for ages and she’s the first one who’s noticed. Awww, Spencer. He has had a rough year. Poor guy. I think he’s going to get the Mama Michonne treatment.

Cut to Carl and Enid walking through the woods. So THAT’s where Enid has been disappearing to. She doesn’t seem to be super-psyched to be there…

We couldn’t possibly get through an episode without Daryl and/or Rick being soaked in sweat, could we? This time, they’re running the Alexandria 5k after that truck.

And Daryl STILL stops to get the fucking Orange Crush out of the vending machine when they find it in the road.

Rick: “If there are still people out there, we should bring them in.”
Daryl: “What, like this guy?”
Rick: “No, not this guy.”

And off they go, back to running. Who’s going to barf Orange Crush first?

Enid and Carl are sneaking out into the woods to READ COMIC BOOKS? They’re not even making out??? You guys, I’m so disappointed in you.

They get freaked out when they hear Spencer and Michonne walking close to them. Enid decides she’s done with their stupid field trips. Then a walker starts coming toward them. A walker that they obviously knew.

Oh, shit. Who is the walker? Is it Ron? It’s Ron, isn’t it? Enid wants to kill it and Carl won’t. Why won’t he kill it? Carl tells her to go away. I love her typical teenage girl reaction, “Fine. What. Ever. You. Suck. Carl.”

Rick and Daryl find Jesus changing a flat tire on the truck. The jump him and DAMN, Jesus can fight.

They get the keys back from him and leave him tied up by the side of the road.

And we’re down to the last surviving can of Orange Crush.

These two need their own adorable buddy movie, I swear.

They spot a barn, pull off into a field and what is that bumping around on the roof of the truck? Dude, JESUS IS ON THE ROOF!

“Hi, my name is Jesus. But my friends used to call me Houdini.” Dude got out of those ropes in two seconds flat. Daryl jumps out to chase him and cue the Benny Hill music. Oh, wait, this is the Internet, so….

I think Daryl might have a point, there, Rick. This day is not going well.

And the door of the truck hit poor Jesus in the melon on the way past, so he’s out like a light. And Daryl wants to leave him in a tree.

Of course he does.

Oh, shit. That walker was Deanna. And Carl led her to Spencer. Damn. As soon as I think that kid is going to get irritating again, he does something like this and makes me want to find him all the giant cans of chocolate pudding in the world.

Poor Spencer. That’s so, so sad. I’m glad he got to put his mama to rest. She deserved that.

Mama Michonne strikes again when she tells Spencer, “I’ve been out here all day chasing you all over these woods. You still have a family.”

I love Rick swerving to make Jesus fall into Daryl. They’re such brothers.

Cut to Carl being so freaking sweet with Judith. It kills me. Then Michonne joins them and they make me cry.

Carl saying he would kill Michonne if she was a walker is the sweetest thing. This show is fucked up.

So Alexandria has a new sign. “Mercy for the lost. Vengeance for the plunderers.”

They take Jesus to Denise. And Daryl is adorable about not arriving with a case of Orange Crush in hand.

Jesus gets to stay the night in Wolf Jail. At least they left him a little note.

Butch Cassidy and the Sundance Kid.

Rick goes home and collapses on the couch with Michonne and OH HELL YES FINALLY!!!!!

They’re pretty much already married and parenting together. They are the perfect alpha couple! OMG, I’m so happy! YAYAYAYAYAYAYAYAYAY! 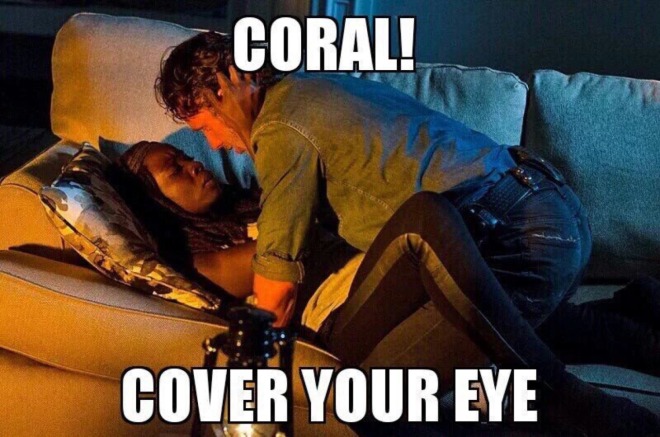 Dude, Jesus. Give a bitch a moment to enjoy the fucking afterglow. And is there a single lock that can hold you? You’re like that annoying dog in the Poky Little Puppy story.

Next week on The Walking Dead: I have no fucking clue. A bunch of people in an RV? I don’t even know.