God, The Walking Dead has been good this season. I’m done with school and so now can spend some time pondering the majesty of this fucked up universe that Rick & Crew live in. This episode was a doozy. Finally, the arrival at Alexandria!

“We brought dinner.” Daryl really knows how to ingratiate himself.

The interviews with Deanna were interesting. I loved getting everyone’s individual perspective. They reminded me of the episodes of MASH with the news interviews. Or the ones with Sidney the psychiatrist on MASH. Either way, I loved that element.

Rick quite literally looked like he expected that perfectly nice little chair to chew his ass off.

Once Rick gives the OK, they all go to surrender their weapons and Carol once again proves that she is smarter than anybody else ever. I loved the moment of her playing helpless while taking off the biggest badass fuck off gun of the bunch. “Oops! Who me? I’m just holding this for one of the big strong men…”  PRICELESS.

And then the beard came off. I will miss feral Rick. Did you know that Norman Reedus has Rick’s beard in a baggie in his fridge? He does. For reasons. 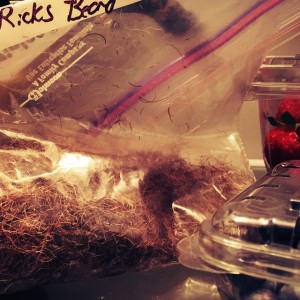 ANYWAY….Then in came the new nice blond girl, Jesse, to give Rick a haircut and flirt with this poor man who is so out of his element that HE’S SCARED OF ARMCHAIRS. Give him a few weeks, there, girl.

Then Daryl had his interview. Daryl Dixon, are you still carrying that damn dead Opossum around?

I loved the family slumber party in one house. Can you imagine how weird it would be for them to sleep in separate houses after being within whispering distance of each other for months? I would have been shocked if they had done anything else. Circle the motherfucking wagons, people.

The next morning, everyone goes out to explore and Rick has a complete panic meltdown when he loses sight of Carl and Judith. Only to find them getting their cheeks pinched by a nice old couple. I almost freaked the hell out when I lost sight of my kid at a birthday party at an arcade last weekend. And there were no zombies. Just potential pedophiles. So I’d say his freak out was completely understandable.

Carl broke my heart when he met his new friends and was so freaked out by the normalcy of their lives.

Yes, Carl. They did really just ask you to play video games as if you haven’t spent your tween years learning to stab walkers in the head and perfect your aim with a rifle. Poor baby boy. I just want to put him in my pocket.

That night, Rick goes for a midnight walk and meets Jessie’s husband.  So…he’s a douche. Obviously, Rick will be killing THAT guy.  Stay tuned…

Then came my favorite part of the whole night.  Carol’s interview with Deanna.  SHE IS MY QUEEN. She is my devious, devious queen!

GIVE THAT WOMAN AN OSCAR!!!!

Then we cut to terrifying Soccer Mom Carol and Daryl looking puzzled as hell.

Ha! I love Carol and Daryl. They make me happy. Has Daryl actually left that porch? At all?

And then Carl spots his potential new girlfriend, Enid, climbing over the wall. He follows her, loses her, then he and Rick have some father/son bonding time….

That’s how the Grimes boys rock it out.

Oh, Aiden. Aiden, Aiden, Aiden. From the moment you opened your mouth, I kind of got the feeling that Tara was just sitting back and waiting for the moment when Glenn would have enough of you and pop you one in the face. Because, really, she and Glenn are the most awesome friend couple. And Glenn has no time for your douchebaggery. Or your pet walkers. Gross.

Next we see Rick, he’s coming downstairs all polished up in his new uniform, which FREAKS ME THE HELL OUT. And he proceeds to go out on the porch with Carol and Daryl and reassure them that, yes, Daddy is still a little terrifying.

I think Alexandria will be basically a good place for them, but no place is bullshit free.

I can’t wait to see what job Deanna gives to Daryl. THAT should be interesting.

It will be so interesting to see what this feral bunch do in a civilized place going forward. Do they become more civilized or do they make the place more feral?